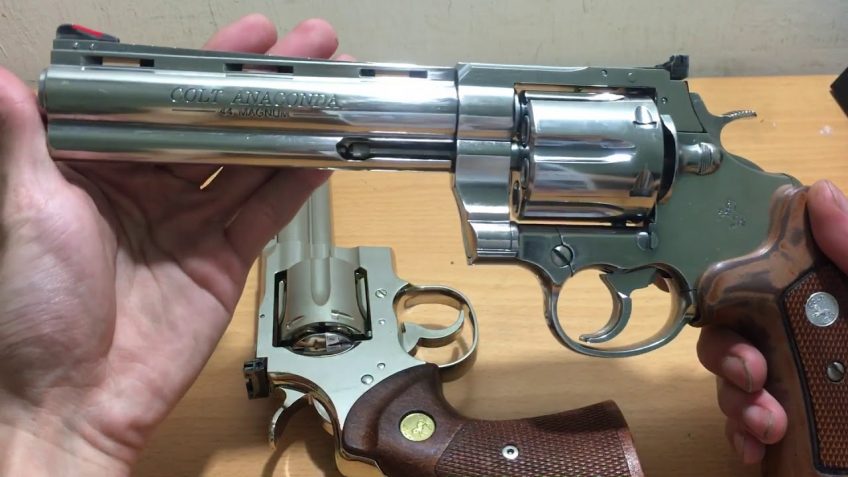 I’ve put the gen three wood grips on the gun instead of the wood grips that come with it from the factory.

Now we’re diving into the differences between Colt Anaconda and Colt Python. One of them’s 44 magnums, and one of them is a 357 Magnum. So you’ve got a smaller statue in the 357 than you do the 44 magnums and a lot bigger cylinder with a 44 Magnum.

Now, let’s view trigger pull differences. In the case of the Anaconda, the double-action is averaging about nine pounds nine ounces. And the single action is approximately around six ounces. So python is decently lighter than the anaconda.

The Anaconda feels lighter even though it isn’t and the double action on the anaconda also feels better. The Python, on the other hand, feels smoother.

As for me, single-action feels better on the Anaconda than it does a Python. I guess it’s just for the more extensive leaf system even though it is heavier, but you do have a lot bigger trigger on it as well.

I’m not sure then it is a different trigger though, I believe it’s a little bit wider, is what it is. But it feels better to me. Not sure how you all will feel. But a few things I run into with the Anaconda, though.

I cannot get the grip screw tight enough on them, as they have severe milling marks. This is the 1716th one made iI’s ac zero, so this is a pre-production Anaconda.

Before they let them off to the public, they had a zero in front of the ac. The new ones that were made after had an ac2.

The hammers on them look the same. Both of them are six inches.

I’m still looking for the eight-inch anaconda, and I’ll have a review out on that one as soon as I can.

The anaconda doesn’t come with wood grips, it comes with the pack mark ribs. The grip screw in the bottom is not long enough. I finagled with it, for an hour straight trying to get it. I’m not going to be shooting this gun. You can’t shoot whenever the grip does that right there. It won’t be able to handle the 44, and it will come back right out of your hand.

This python right here was sent back twice. I will also send this anaconda back because the grip doesn’t work.

The anaconda is not worth $1500. The python still has a few problems. The newest one I picked up, though, had several numbers of 170 000, which I don’t think they’ve made that many, but that was a serial number, and it felt pretty good. I would hold off a little bit on the Anacondas.