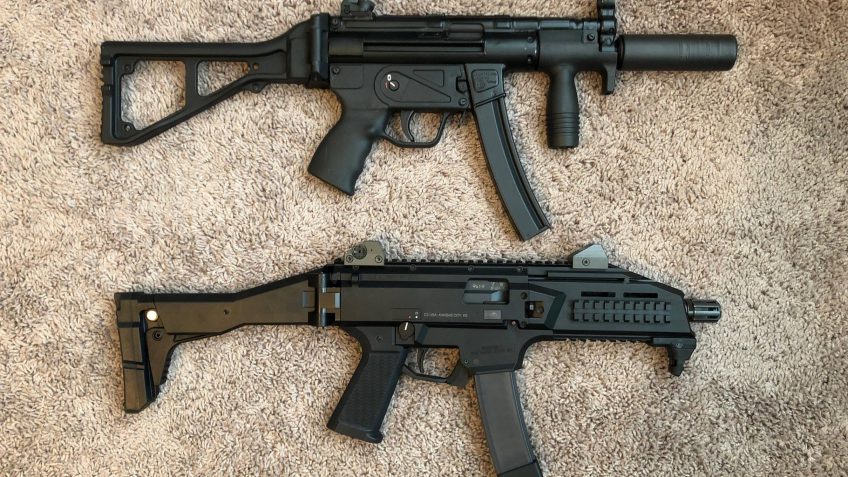 Today, we compare the traditional mp5 to the relative newcomer to the SMG market, the CV Evo 3. Both of them have been converted over two carbines with mp5. Here we have a POS mp5 import. We’ve added an extension to the barrel made by MFI. We have the original Pakistani POF buttstock. This is a check-made Scorpion Evo 3 pistol that has been converted into a carbine with a permanently attached flash. Hider barrel extension up here and the folding stock that came with the SBR kit.

I had MK gun mods take the US-made flash hider from the SDR kit and stick an extension inside it and had that hinge to the barrel. As a result, it was as original as possible and as light as possible. They are very similar guns as far as pistol, caliber, carbine, and conversions are concerned.

I have seen many people compare the Scorpion with the Mp5, often recommending to get the mp5 instead of the Scorpion. I know many people who’ve wanted an Mp5 turnaround. With the Scorpion over the Mp5, it is possible to overcome the minuses with some tweaking and additions.

I would prefer the mp5 mechanically over the Scorpion. Then there’s the bear base level, which is just the price difference between a quality build mp5 and the Scorpions. The Evo 3 will be cheaper even if you buy the full-fledged carbine version or overtake a pistol and convert it.

This is the POF, which is about $1,450. It’s almost cheap, as you will get a quality, real authentic mp5 type gun. I’ve always liked the mp5 a lot, even from when I was a kid and thought of video games and movies. When I was able to shoot, I just loved how it felt in control on the full-size mp5. I’ve always wanted an mp5 of some stripe. I had got a scorpion before. I got an mp5 because when the scorpion came out, they were just priced right, and I could afford one.

CZ is a very reputable brand. One of the useful things that I like about it is the controls. No matter how you want to attach a sling or you want to eject, your magazine is fully ambidextrous. You’ve got a bolt release that you can lock back with the knots set out here. You can lock it back with the bolt release, which is also right here and go down easily.

Some people will complain about not being able to put their favorite AR pistol grip on here. It’s not an AR: the stock is extendable and foldable to make it very compact. If you want to put an AR stock on here, you can get an AR stock adapter and put an air stock. Or a pistol brace, if you’re going to keep it in pistol configuration without going to carbine, or is the SBR out. There are just all these sling loops on it.

The sights are perfectly serviceable. The red dot or scope on there if you want to pretty easily. There’s it’s just well thought even the things that people complained about, like the extended safety lever, which can shed has not changed out on his, but I have changed online they would. People complained that they came out with a deleted safety. People have been complaining about crack feed lips, about crack people at sauna magazines because they’re rusted experience. I even left mine loaded for about eight months and didn’t have any issues. That gun there was one of the first batches that we shipped out. We’ve had it over for a while but not kept it loaded, admittedly.

They’re working on metal feed lift magazines, and then there is a company that has already made some the name is „Escaping me. “ You can set this gun up basically however you want to set it up. I think I’ve seen them around 750 as low as 750 about that for the pistol with a carbine being a little bit more mature for the entry price of I think.

I would say my biggest complaint about it is the trigger is a little harsh and plasticky. This is not an AR trigger. It’s not a competition AR trigger. It’s just not spectacular but also not terrible. I would say that Mp5 is not better in the trigger department. No, it’s still a very tough cold, and I don’t know what the trigger scale weighs those out. I don’t think my trigger scale would trip one of those without maxing it out. There’s something about the mp5 trigger that it has a very springy feel to it that. I find it somewhat more pleasant than the kind of stiff initial plasticity single-stage pull of the Scorpions. Mp5 has a more extended a larger battery, more significant case more comfortable. Yes, the sights on the Scorpion are different from the mp5, but the profiles are much the same we have.