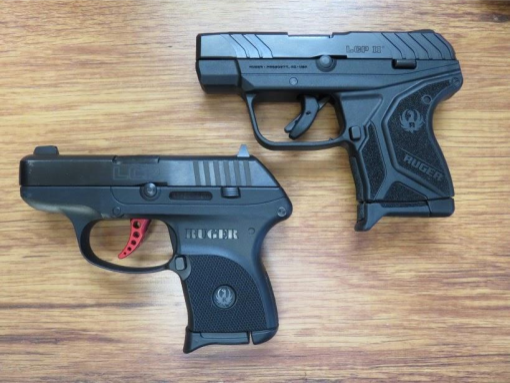 Today we will compare the Ruger LCP and the Rugesimilar things

They’re both single-stack 380s mainly designed to be pocket pistols. Many people say these both are the same gun, which they are to some degree. But at the same time, there are a lot of differences. Some of these differences we’re going to be going over in this blog.

First things first, let’s go ahead and talk about the similarities between these two.

LCP and LCP2 come with a six-round magazine. These are both six-round guns. Six plus one, you can hold seven rounds in the gun. The magazines are identical, and this one here is an LC p2 mag. The mags are compatible with one another. If you already have an LCP and want to upgrade to the LCP2, you don’t need to run out and buy many different mags.

The disassembly and reassembly of the guns are the same. Both are very easy to do with one pin.

Now let’s talk about a few things that are different between these two guns. We’ll go ahead and start with the frame. Both of these guns are tiny. They fit in the palm of my hand, and they are designed to be pocket guns. The LCP2 on the right side is just a little bit thicker than the original LCP. I like that, it helps you get a little bit better of a grip on the gun, and it helps with recoil. Overall, I think it was a great idea of Ruger to increase the gun’s width just a little bit.

While we’re on the frame, let’s talk about the texturing. There is a massive difference in the texturing of these two guns. On the first-generation LCP, it has almost a dimpled effect. No matter what, this is not a fun gun to shoot. Neither of these guns is guns if you’re going to take to the range and burn up two or three hundred rounds. It’s just not going to happen. They’re not comfortable; that’s not what they’re designed for. But on the Ruger LC, we have this dimpling up on the front strap, and we have a few lines almost it’s not checkering because there are only lines going one way. On the Ruger LCP2 – we almost have like this stippling, and I like it with grooves. It is a very comfortable gun for its size. We also have a little bit of stippling, so routed got rid of those grooves on the front strap. Then on the back, they did increase the size of their little patch of stippling or dimpling compared to the LCP1.

As I said earlier, neither of these guns are fun to shoot, which is a fact. But on the Ruger LCP2 – just like the LCP1, they did include a little channel right here for your thumb to rest. That makes it a little bit more ergonomic.

I forgot to point out that the texturing of the LCP2 – is up here on the trigger guard; there also is a little bit of texture. I don’t shoot like this, but I know some guys that do. They wrap their finger around that trigger guard. I’m not a big fan of that, but Raider did give you the option to do that if that’s something you’d like to do.

I am a bigger fan of the LCP2 – just because of some of the options out there. Is it a little bit more comfortable to fire at the range. I do like the trigger and the front serrations compared to the LCP. But that doesn’t mean the LCP is a bad gun. These are both excellent options for a pocket pistol.

Both of these guns are excellent options, and as far as price goes, they both are right around $200. I’ve seen both of them go for like $230, as well as both of them be on sale for like $175, maybe even a little bit less. So we’re going to go ahead and say they are both in the $200 price range.