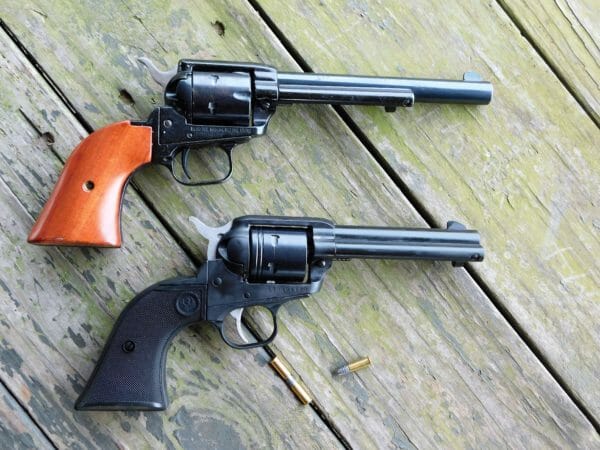 Welcome to our blog, where we share our perspective on guns and shooting.

Ruger’s been making single-action revolvers since the 1950s. They have a whole line going all the way from 22 up to 44 Magnum. They’re very popular with the cowboy action sports and the just the shooting community with their bearcat and their single six, they’re just great quality firearms. But because of manufacturing processes and the fitting that goes into revolvers they can be expensive. So Ruger just introduced their Ruger wrangler, this is a 22 single-action pistol.

And today we will talk about these two guns – Ruger wrangler vs Ruger Single Six.

We’re proud to have this old model Ruger single six. And why is it an old model? Because for one it has three screws and it has no transfer bar safety. So, when you let the hammer down, the firing pin would rest on and on around, if it was underneath the firing pin. If you whack on that hammer, then you’re going to have an accidental detonation. So that makes this the old model.

It sure does have a sweet trigger, but the old model was made the original Ruger single six (was made from 1953 until 1972), when they added the transfer bar safety in this particular one. I had to call Ruger to get the date, but it was manufactured in November or at least it shipped out of the factory in November of 1968.

Let me give you a closer look right now at this guy and then we’ll talk about the pros and cons. I’ll just go right to the cons and you can see some pretty significant cosmetic problems here on the aluminum ejector rod housing. There are also some cosmetic problems here, some corners that are dinged on the aluminum grip frame. Overall it looks nice and one thing that I liked about it is that all of the screws are pristine. All of the screws have either not been touched or they have been handled by somebody who knew what they were doing.

That is the old model Ruger single six with a six-and-a-half-inch barrel. It’s in great mechanical shape and that means that the cylinder is tight in the rotation this way. There is no end shake and there’s no movement front to back on the cylinder so it’s tight.

Ruger cut down on some of the manufacturing processes to make Ruger Wrangler about half the price of your Ruger single six. And yet it still has that Ruger quality. Now the wrangler was sent by Ruger to be part of the get zone holiday gift guide, which we do every year. I wanted to take it and do a full review right here on the suits channel. There’s just something about a single-action revolver, taking it to the range slows things down these were designed in the 1800s. And they are still viable because you can still get modern calibers for them. Several companies make them, but to me as far as a good solid single action revolver Ruger makes some of the best. Typically, fairly reasonable compared to some of the others.

But one of the things about the wrangler is it was made to be budget-friendly. And yet it still has good Ruger quality. now this is pretty much based on the Ruger single six and that’s been around since 1953 and then the Ruger Bearcat which is a smaller version this is in 22 long rifles we’re going to go ahead and check to make sure the cylinder is empty and we have an unloaded firearm nowhere I have a 1961 vintage single six the bluing is impeccable, it has nice beautiful wood grips. It’s just a gorgeous firearm. The mechanics are very smooth.

Let’s go and check to make sure the gun’s unloaded which we’ve already safety checked. We’ve got to lift the hammer back to turn that cylinder. and then we’re good to go.
One of the biggest differences you see right off the bat is the cerakote finish on the wrangler, which is less expensive to produce than the deep cold bluing. That’s just absolutely incredible. One of the big advantages of cerakote is it will help protect against rust, moisture, and corrosion. When you have a blue firearm, you’ve got to keep it maintained. A little closer than you do, your standard finish like this. It’s less expensive to produce the cold bluing takes a lot more polishing. That is one of the first things that the wrangler has going, but it also again has an advantage with this finish.